One of the best sources of Irish women’s history in the Revolutionary Period (1916-1923), are the military pension applications files, digitised by the Military Archives and available online.[1] While many of the women who were in leadership positions in Cumann na mBan or the Citizen army are already well known, the military pensions give us the voice of the unknown women, working class women, rural women, ordinary members of Cumann na mBan.  These are women whose contribution to the War of Independence, 1919-1921, was vital but often hidden. They were the intelligence gatherers, they were the spies and message carriers, they ran safe houses and took care of arms dumps, they transported arms and bomb making equipment to ambushes, they collected and buried the war dead, they were the essential backbone of the military operations.  They were also the ones most in danger from the Crown Forces as they could not, usually, go on the run.  One of those women was a north Kerrywoman, Amelia Wilmot (nee Canty), daughter  of a blacksmith, born in 1874, in  Lyracrumpane, near Listowel.

Like many daughters of tradesmen in rural Ireland she attended the local school for a few years, and by 1901 she was 24 and living, at home, with her widowed father and siblings. This is when her life takes an somewhat unexpected turn. By 1905, she was in Aldershot in England, where she married John Wilmot, a Private in the 8th Hussars (The King’s Royal Irish), on April 9th.  This is not as unusual as it seems however, as John Wilmot was  also from north Kerry, from Knocknagoshel, where he was born in 1877, the son of Daniel Wilmot, an agricultural labourer, and his wife, Mary Bunworth.  There could be several reasons why John joined the 8th Hussars in December 1899, at Tralee.  The Boer war was on at the time, but there was no conscription. However, as the son of an agricultural labourer, his prospects in Lixnaw would not have been  good. There is also a report in Kerry Sentinel of March 3rd, 1900, which might give us another reason.  At the Petty Sessions of that month, Mary Wilmot of Lixnaw had her husband Daniel charged with abusive language and bound to the peace.  In her evidence Mary Wilmot said that her husband had threatened her life on previous occasions and that they were not ‘six months married when he beat her’ first.[i] It is possible that John joined up to get away from what was a violent home. 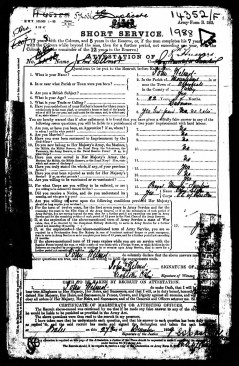 Amelia and John possibly knew each other before he joined up and sometime in early 1905 she travelled to Aldershot. John had seen service with the Hussars in South Africa between 1900 and 1903 and was back in Aldershot with his Regiment by 1905.  In 1906, the couple had their first child, John James.  Later that year John transferred to the Army Reserves and the family returned to Kerry. Their second son, Daniel, was born in Tralee in 1908, and another son, William, was born in Listowel in 1911. John is described as a coachman on Daniel’s birth record and as a labourer on William’s birth record. The family moved around and may not have lived together during all of this time.  John is recorded in the 1911 census as a servant/car driver at an Hotel owned by the Hartnett family in Castleisland.  Amelia, who was pregnant at the time, and her sons John and Daniel, are not recorded here, nor could they be found in the census. John re-enlisted to active service with the Army (the 7th Hussars) for a year in April 1911 and returned to Kerry in 1912.  The couple reunited and Amelia gave birth to her last child, a daughter, Julia, in 1914 in Listowel, where the family were then living. Their life was not easy however.

John was tried in March 1914 at Listowel for drunkenness and fined.  He was then called up to his regiment in August 1914 as War had broken out.  With John of serving, Amelia now had responsibility for their young family in Listowel, and while she would have received a separation allowance as the wife of a serving soldier, it was not enough for herself and four young children, so by 1916, she had a job as a housekeeper and cook in the RIC Barracks at Abbeydorney.

As the wife of a soldier, she would have been trusted by the RIC; but Amelia had politics of a different kind, as her service for the North Kerry Flying Column was to show. When war broke out in 1919, while working in Abbeydorney RIC Barracks, Amelia was in a great position to supply information to the North Kerry Flying Column (part of 1st Kerry Brigade of the IRA) on RIC movements, in and around north Kerry. 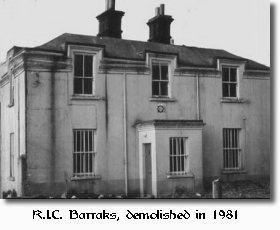 She was also able to get arms and ammunition out – between April 1920 and December 1920, she ‘procured’ 2 bombs, 1 service rifle, 1 shotgun, 1 miniature rifle’ as well as 500 rounds of rifle ammunition (.303) and several rounds of shotgun ammunition from the Barracks, for the Abbeydorney Company of the 1st Kerry Brigade, IRA.[3]  More importantly and usefully, for the North Kerry Flying Column on the run, she supplied information about the movements of the ‘enemy forces as regards arrests and raids’.[4] 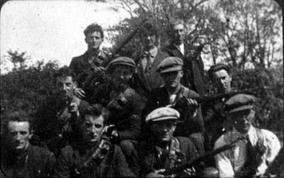 In January 1921 she transferred to the Listowel RIC Barracks as cook and housekeeper. Taking ‘her life in he hands’, she continued to supply information, arms and ammunition.  In June 1921 she stole a Webley revolver from a ‘drunken Tan’ and sent it to the Commander of the local Column, Denis Quill.

She continued to supply information, and this seems to have caused some suspicion in the Barracks about her. However, Denis Quill sent her a threatening letter from the IRA, ‘warning her to leave Listowel Barracks at once’, as a ruse to deflect from any attention from her movements.  The ruse worked, so much so that she had a bodyguard of RIC escorting her to and from work! 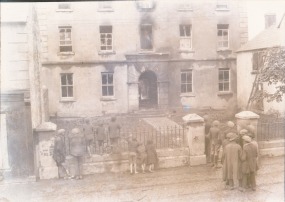 It is perhaps ironic that Quill used what was a common tactic to control women during this period, attacks by the IRA, on girls and women suspected of consorting with the RIC or Crown Forces, to keep Amelia safe in her position in Listowel. She continued to supply arms, ammunition and information until after the Truce, when she was dismissed, finally, from her post in September 1921, doing all this ‘at dreadful risk to herself’ and she ‘had several narrow escapes’.   Such was her work for the IRA that Patrick McElligott, Comandant of the Old IRA said that ‘it would have been nearly impossible for us to carry on, in such a hotbed of spies and informers, without her aid’.[5]

What happened to Amalia after the War of Independence is less clear, although what is in the records shows she did not have an easy life. Her husband, John, had been discharged from the Army in 1919, but he does not seem to have returned to the family home. In October 1929 a case before the Listowel District Court mentioned that a Mrs Wilmot, ‘a woman until recently employed by the Civic Guards in Listowel’, summoned her husband, an ex-soldier, for desertion of her and their four children.[6] Amelia have obviously returned to her job with the Civic Guards after the setting up of the Irish Free State.  However, John had deserted his family and left Amelia responsible for their children. 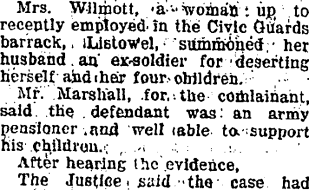 In 1934 in a letter to the Military Pension Board, Amalia said that she ‘was crippled  (with Rheumatics) and cannot manage to exist any longer on my present income’. One by one her children had left for England for work, and by the 1940’s, Amelia was living, on her own, in lodgings in Listowel. In December 1946 she wrote to the secretary of the Department of Defence that ‘all [she had was] this pension of £7-10-00 a yr, plus the old age pension of 10 per week; ‘I am 73 years of age now and unable to do anything. I find it impossible to live on my present income-I have to pay rent for a room (5/ per week) and but food, clothing and fuel. As I am crippled I cannot manage to exist any longer on my present income and I trust that the Minister can see his way to increasing my pension’.  She was awarded 1 and ½ years for pension purposes in April 1941.  Amelia Wilmot, an ordinary, working class woman, a wife, a mother, a member of Cumann na mBan, died in 1955, at the home of her daughter Julia, in the UK. Julia applied for a funeral grant stating that her mother had left no will, as ‘she had nothing to leave’.

This above is a brief glimpse into the life of an ordinary women who gave extraordinary and dangerous service to a cause she believed in.  She had a hard life, a life of poverty, desertion and some violence, but she also played an indispensable role in the conduct of the War of Independence by the North Kerry Flying Column. Her pension application also reveals that the State she worked to bring into being did not fully appreciate or compensate her for her work. Her pension also reveals a courageous, committed women, and gives a snapshot of the lives and histories of some many ordinary women, who provided similar service throughout the revolutionary period. Amelia’s story and their many stories can now be rewritten into our histories.